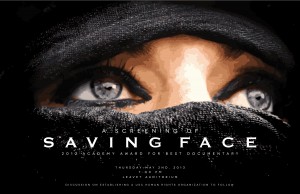 Every year an estimated 1,500 people – the majority of them women – are known to be victimized by brutal acid attacks.

Join us for a screening of the 2012 Best Documentary Short Oscar®,  “Saving Face,” on May 2 at 7:00 pm in the University of Southern California (USC) Leavey Auditorium.

There will be a discussion on establishing a USC Human Rights Organization following the screening.